Cloud Computing for the Public Sector

Public, private and hybrid clouds present tremendous opportunity for organisations to reduce costs, lower their carbon footprints and enable more fluid responses to the competing demands for information technology resources. Unfortunately, legacy organisational design may hamstring progress. This paper explores how cloud computing can help IT organisations—and especially those in the public sector—shift toward service and value driven organisations, identifies the evolutionary gap they must cross if they are to improve outcomes, and offers a 5-step plan to help even the most timid organisations take their first steps toward improved outcomes.

During the early part of this decade, tremendous revenue growth supported expansion of IT budgets in many organisations. Although enhanced funding enabled some ambitious transformations, escalating technology spending also masked issues that have more recently become evident, chief among them complexity and effectiveness. With tempered economic growth comes the need for cost containment and a renewed focus on the intersection of IT efficiency and IT effectiveness—IT impact. IT departments with a great deal of complexity are chaotic and reactive: they devote the majority of their time to fire-fighting and most of their budget is associated with merely keeping existing systems operating. As the IT platform is optimized, IT organisations become more proactive. Standards emerge, and the introduction of automation technology ensures that more time and money can be dedicated to innovation. Nonetheless, it’s not until IT groups reach the stage of revisiting earlier decisions, and redesigning (or eliminating) older processes that they’ll find themselves equipped with the sort of cognitive and fiscal surplus necessary to make the leap to a service and value driven organisation. In order to move towards that destination, many IT organisations are seeking new routes to improve the effectiveness of their IT investments, and nearly all of them have embarked on some sort of virtualisation initiative to take advantage of its numerous benefits:

Based on the results of virtualisation initiatives, many firms have incorporated the technology into their standard portfolio. In fact, recent industry surveys suggest that the majority of firms will be virtualizing more than 50% of their servers before 2012. Cloud computing represents the next step in this evolution.

Cloud computing is a disruptive innovation that expands its frontier with each evolution of technology. Although the idea of hosted applications emerged in the 90s, it was not until the rise of web-based Software as a Service (SaaS) that the model became a viable component of enterprise architecture. A decade later, enabled by advances in technology, SaaS vendors have expanded their portfolios, and new entrants have pushed the cloud deeper into IT organisations with the addition of new service classes, broadly:

Understandably, many organisations are concerned about having third-parties manage critical components of their business infrastructure. However, just as appropriate methods exist to mitigate whatever risks accompany shared real estate, shared telecommunications networks, and shared business process outsourcers, most organisations can overcome whatever barriers discourage adoption of cloud-based technology solutions.

Implications for the Public Sector

Whereas small and mid-sized organisations may leverage public cloud infrastructures offered by Microsoft, Amazon and Google, nowhere is the opportunity to create, leverage and benefit from private and hybrid clouds as great as within the world’s largest organisations: the public sector. With approximately 250,000 employees operating in more than 150 countries, the federal public sector is easily Canada’s largest and most complex employer. With such size and scope of services, the agencies that comprise the public sector are ideal candidates for cloud computing.

In spite of this opportunity, adoption is threatened by legacy funding models and existing organisational designs that fail to incorporate both advances in technology, and the role IT plays in enabling increasingly collaborative business processes that frequently transcend divisional (and often organisational) boundaries. Indeed, a recent Forrester survey of business and IT executives suggests that as organisations contemplate their path forward, nearly a quarter of them** face funding or other organisational impediments** that impair their adoption of internal compute clouds.

The move from silos of single-purpose IT infrastructure to extra-agency hybrid clouds is evolutionary, but does nonetheless represent a substantial transformation in the way that IT services are managed and delivered. As noted earlier, many existing organisational designs are poorly equipped to accommodate this change. In fact, existing organisational design and the mechanism through which money is obligated encourages (if not mandates) isolated IT investments, thereby curtailing progress toward a more agile IT organisation that can respond quickly to new demands. The figure below illustrates the evolutionary gap in the path ahead. 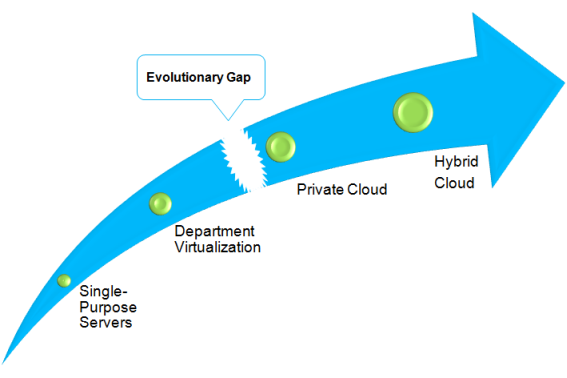 As IT organisations strive to mature from reactive entities to value-driven service providers, the sophistication of their IT infrastructure must keep pace. Accordingly, infrastructure will generally evolve from single-purpose servers, to nascent virtualisation initiatives at the department level. Once departments are comfortable with virtualisation, several may consolidate their installations as they strive to increase resource utilisation and squeeze additional benefits from the technology. Although many departments will continue to refine their environments through process improvement and automation, none will make the leap across the evolutionary gap without first taking four steps:

The New Face of the IT Organisation

Without the necessary precursors of financial investment; system and information security; a refreshed organisational design; and, executive leadership and support cloud initiatives will struggle to deliver on promises. However, with those pillars in place, a new IT organisation can emerge with a focus on platform architecture, standardisation, and co-ordination of distributed (sometimes extra-organisation) teams as illustrated previously.

Some departments will undoubtedly balk at being mandated to purchase IT services from an agency beyond their control. Notwithstanding their trepidation, if one accepts that the new IT organisation’s first responsibility is to serve its customers, one should also accept that it is the IT organisation’s responsibility to provide the best possible service. In the same way that governments often establish import tariffs to provide domestic producers with short-term protection from large foreign competitors, the IT purchase mandate might be made to expire in 5 years. Offering such temporary “protection” would help incentivize service excellence from the new IT organisation, and afford it sufficient time to develop both foundational infrastructure services, and promulgate frameworks and standards that would streamline a later migration to externally managed clouds if agencies believe their needs could be better serviced elsewhere. Although standards do raise the specter of defection, the effect seen at Google is more likely. By providing no-cost access to data and application programming interfaces for franchises such as Maps, Documents and Advertising, Google has not generally seen developers take their data elsewhere. Instead, developers have strengthened their bond by building value added services atop the Google foundation.

Migration scope and speed are the primary levers used to alter the benefit-cost ratio of cloud initiatives. While organisations as large as the public sector may require time to address privacy, data stewardship and information security concerns, they also stand to derive substantial benefit from the scale of their operations. Consequently, as they work to overcome barriers, they should begin development of their enterprise cloud strategy, adjust organisational and governance structures, and move to construct their own private clouds. Later, the scope of cloud initiatives can expand to engage external partners, to enable hybrid clouds.

With the majority of IT spend allocated to operations and maintenance, initiatives that pledge to improve the efficiency of IT service delivery should be at the top of the new-project agenda. When those same initiatives have the potential to increase standardisation, improve agility, and reduce the environmental impact of data centre operations, they demand much deeper inspection. To get started, the public sector should follow a five-step approach:

In a recent Gartner report on the maturity of technologies, cloud computing appears at the peak of inflated expectations (figure below).

The current position suggests that many organisations are about to undertake on cloud computing initiatives in the absence of one or more of the crucial antecedents (financial investment; system and information security; a refreshed organisational design; and, executive leadership and support). Emboldened by earlier successes with virtualisation, many will rush to embrace cloud computing without recognizing that, in spite of being the next step in the evolution of technology infrastructure, there are substantive and important characteristics that distinguish it from enterprise virtualisation. Ignoring these differences can lead to spectacular failures, which in turn will lead to questions about the value of cloud computing. The best way to avoid these pitfalls (and to avoid the trough of disillusionment) is to embrace the potential, but ignore the promises. That is, begin with smaller project to build momentum, and ensure there are clear goals that have measurable standards for success. As teams develop greater competence with the technology, and as the supporting processes mature, organisations can consider more complex projects. It’s important to move forward, and there’s value in doing so quickly, but starting small and completing work in manageable pieces will provide the necessary education needed to tackle more ambitious projects. You can see some of this thinking in a new report by Vivek Kundra (CIO of the US Government), in which he provides a 25-point implementation plan to reform federal IT management.

Although this paper argues that cloud computing offers the greatest opportunity to the public sector, the benefits of cloud adoption are certainly not confined to government entities. Indeed, other institutions stand to benefit in similar ways through cloud initiatives. Regardless of the organisation embarking on the journey, however, it’s important to recognize that cloud computing is not technology alone. There are, of course, technology components, but if the cloud endeavor is to deliver durable value, it must evolve in concert with the development of people and the modification of organisational and governance structures.

Young, H. (1999). Driving Change in IS Structure: The Application of IT in the Shift Toward the Network IS Organisation. Administrative Sciences Association of Canada (ASAC) Conference. Saint John, New Brunswick.